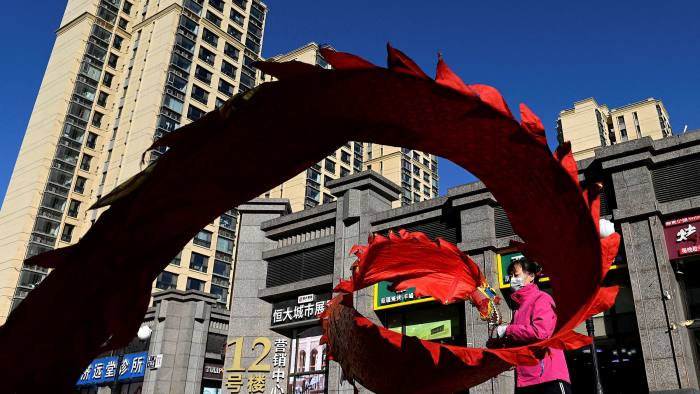 A woman twirls a ribbon in front of an Evergrande housing complex in Beijing. The Chinese government has shown no sign of backing down on the strict leverage limits for the property sector © Noel Celis/AFP via Getty Images

State-owned developers are rushing to the rescue of cash-strapped local governments in China by stepping to the fore at land auctions previously dominated by private sector groups.

Over the past three months state developers have bought three-quarters of residential land sold at auctions in 22 big cities by value, according to a Financial Times analysis of public records. They had previously purchased only about 45 per cent of land plots sold at auctions, which is the biggest source of income for local governments.

A year-long drive by Beijing to reduce leverage across the property sector, which is estimated to account for about one-third of total output in the world’s second-largest economy, has driven Evergrande and other private-sector Chinese developers to the brink of bankruptcy. That, in turn, has damped buyer demand at land auctions, hitting local government finances hard.

“Local governments are counting on state groups, which have access to cheap credit, to keep land sales from falling off a cliff,” said Chai Duo, a professor at Central University of Finance and Economics in Beijing and a government policy adviser. “Debt-laden private developers are focused on reducing their leverage.”

State-owned bidders include highly leveraged local government finance vehicles, which have traditionally focused on infrastructure projects rather than real estate. According to the public records reviewed by the Financial Times, LGFVs have accounted for about a third of land purchases by value at auctions since September, compared with just over 10 per cent earlier in the year.

“Our land purchases are political decisions, not business ones,” said an official at Fenghua Urban Investment Corp, who asked not to be identified. Fenghua is an LGFV in the eastern city of Ningbo, where it paid Rmb682m ($107m) for two plots of land earlier this month.

State-owned bidders, however, have not been able to fill completely the vacuum left by retreating private-sector developers. Since September, almost a third of all auctions have failed, with no bidders willing to pay the minimum price. The previous auction failure rate was just 6.5 per cent.

In Beijing, traditionally one of China’s hottest property markets, 26 out of 43 plots on offer at the city’s latest auction in October failed to attract even a single bidder.

“We are at the beginning of a systematic collapse of land auctions if policy tightening continues,” said the head of research at a leading real estate consultancy in the capital, who asked not to be identified.

While the Chinese government has eased some policies to relieve the pressure building on China’s property sector, it has shown no sign of backing down on the strict “red line” leverage limits that pushed Evergrande and a few other developers to the brink.

“The unusual disclosure of a monthly figure is clearly another attempt to calm market sentiment,” Wei He and Xiaoxi Zhang at Gavekal Dragonomics, a Beijing research firm, wrote in a recent report. “Banks have been allowed or encouraged to pick up the pace of mortgage lending.” 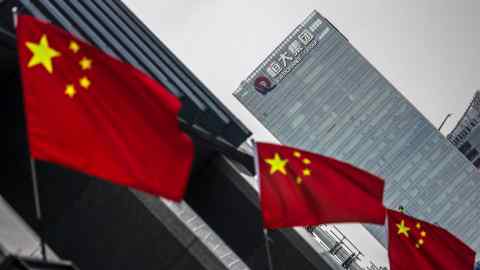 “There is no way the land market can recover without policy easing,” added Ai Zhenqiang, a researcher at Mingyuan Real Estate Research Institute in Shenzhen.

Private sector developers that bid freely at auctions earlier this year said that the market’s recent downturn had dissuaded them from returning to the fray.

On November 8, Niu Wei, an executive at Shenzhen developer Excellence Group, told a meeting that his group “lacked the capacity” to bid at auctions after spending more than Rmb21bn for land plots this year, according to a transcript seen by the FT.

The meeting was attended by multiple Shenzhen developers, banks, trust companies, bond investors and a think-tank affiliated to the State Council, China’s cabinet.

“It makes more sense to stand by than burn cash to bet on an uncertain future,” added a real estate executive in Beijing, who asked not to be named.

Get alerts on Chinese economy when a new story is published